As a child I was called ugly so times that it was difficult to keep count. However, that did not stop me from asking the hottest kid out to prom. Maybe I was naive about my looks or maybe I just didn't care. At one point in my life I truly believed I was ugly, but as long as my mother loved me the rest didn't matter. To be honest, I actually felt special. I didn't have to worry about trying to be "cute" or keep a standard of beauty. I was free to just be me! Also, my mother's love and advice help me grow a skin as thick as my glasses; I was not afraid of facing the world. Which at that moment was my middle school classroom.
I was 12 years old, it was the last day of class before taking our class picture. I still had no date for our prom and I was starting to get a little desperate. However, I was not desperate enough to go with just anyone. Yeah, I was an ugly duckling but I had standards. Thanks self esteem! I wanted to go with this kid who I thought was the cutest kid in the world. His name: Antonio.
I made it my mission to get a date with Antonio.
However, every time I tried to talk to him he would avoid me, as if he was trying to avoid being caught by an ugly monster. If he saw me walking towards him, he would literally go running the opposite way. No shame, he would just look at me and run away. So one day after recess, while the other kids were already inside, I caught him alone in the schoolyard. I stopped him and asked him if he was going to the prom. He was nervous and shyly replied, "Yes." I was very direct, so I asked him if he wanted to go with me.

Antonio said the following:
"You know somewhere there is an island where all of the ugly blind people with huge glasses live. Well guess what? Of all of those people, YOU are their queen...I'm not going with you" And he left me standing there.
Do you think I cried and felt sorry for myself? Nope. I went to class thinking that no matter what, I would go to my prom; with or without a date!
So I ended up going to my prom, found myself a new date and had a great time. Thank you self esteem! 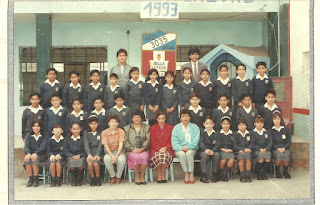 I'm the only one with glasses and Antonio is the kid in the second row, one in from the right side.
Posted by Shirley at 7:06 PM

Shirley
Born in Lima, Peru came to the United States when I was 17 years old. I lived in Louisiana, and Illinois but Stamford CT is my home. I’m married to an Iowa man and we have a beautiful baby boy. I’m an US Army Veteran, retired Greenwich Police Officer and Author of a Children’s book Oso’s Tails Cooling Off with a Cucumber. It’s about my real life Rottweiler obsession with fruits and veggies :)